I often refer to the innovations developed by Wenger and every so often I’ll actually go into detail about them, but what’s the easiest way for the average member to check them out?  Well, you could use this as an excuse to buy a number of SAKs, (as if any of us need an excuse!) or you could check out the S557.

Available with Evolution or new EVOGrip scales, the S557 incorporates many of Wenger’s 85mm innovations.  The impressive list is:

In addition to all of the innovative features the S557 also includes the standard can and bottle openers (bottle opener with wire stripper in addition to the integrated screwdriver tip), nail file, reamer/awl, corkscrew, toothpick and tweezers.  All of this works out to a very handy and well equipped knife.

So how do all of these innovations really work?  That is indeed the ten million dollar question, so here is a down and dirty breakdown of these fancy features.

Locking Main Blade: Initially the lock release lever seems like it might get in the way or be uncomfortable when using the knife, but I don’t find it uncomfortable or obtrusive during use at all.  I also have never accidentally disengaged the lock during use, making it somewhat effective.  While the S557 may be relatively new, I have been carrying a Wenger Adventurer with the PackLock system for the last ten years without a problem.  The only problem I have found with the PackLock is the lever will catch on the seam of a pocket when carried in places like my watch pocket.

Scissor and Plier Backspring: Sturdier than the old style leaf spring system, the lever presses against the knife’s backspring, meaning that it will likely never wear out, loosen or break like the old ones occasionally did.  Of course, unlike the old system (which is still in use by Victorinox) this one is not user repairable, so if you do manage to break it, it has to go back to Wenger for proper repair.  The drawback to this design is that the main part of the pliers and scissor “moves” which may make for a less precise cut or grab, at least until you get used to it.

Slip Jointed Pliers: The slip jointed pliers are actually amazingly handy, which is something that many folks seem to disagree with me on.  Admittedly they aren’t much use for any heavy tasks but for smaller jobs, they are perfect.  I had a few computer problems recently and the pliers came in handy for grabbing jumpers off a few hard drives as I juggled them around.  When opened up I found that I could grab the jumpers much easier than I could with any other tool, including the small pliers on a SwissChamp or keychain sized Leatherman.  The downside is that the wire cutters are pretty small, and just about any wire that could fit through the hole could probably be cut by the scissors.  It is important to say that the cutters work very well on the wire that will fit in it.

Universal Wrench: I’ll admit, this one takes some getting used to, but once you do, it’s actually really quite effective.  I have had models with this implement for some time, but I never really made use of it until recently, when I figured I’d better give the sucker a shot!  The jaws may not be very big, but like the pliers, they perform the jobs they were meant for quite admirably.  You have to remember to only turn bolts one way, or else the wrench will fold on your hands.  Fortunately, the wrench is designed in such a way that it won’t (usually) grab a bolt when turning the wrong way.  Need to turn the bolt the other way?  Flip the SAK around.  Simple and effective, once you get the hang of it. 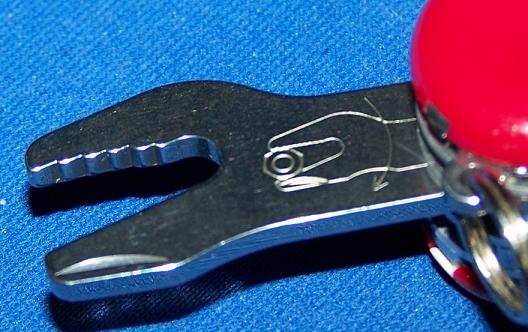 Serrated, Self Sharpening Scissors: I have a love/hate relationship with the scissors, which fortunately has leaned a little closer to the love side since I got my Nail Clippers.  The job I used my scissors for most over the years was trimming errant finger nails, and I hated Wenger’s serrated scissors since they left a jagged edge.  Fortunately Wenger has a great nail file and I managed to clean up the edges with so it wasn’t a huge deal overall.  I can’t say how well they sharpen themselves since I don’t think I have ever had to sharpen SAK scissors, but I do know that the set on my Adventurer cuts as well today as they did ten years ago when I bought it.  The serrations may or may not sharpen themselves, but I can always count on them to grab something securely as it cuts.  I have never bunged these jaws up on anything.

Pressure Locking Screwdrivers: This is perhaps the finest innovation known to SAK kind.  I can’t count the number of times a SAK screwdriver has folded on my fingers while fighting particularly nasty screws, and that usually results in a very nasty blunt tool induced cut, which as anyone who has experienced that can agree, is very unpleasant.  In addition, it’s function is completely seamless- you don’t have to engage or disengage it, it does it all automatically.  Basically, when pressure is put on the screwdriver, it slides back into the handle, locking it in place.  As soon as the pressure is released, the screwdriver pops back out, allowing you to fold it.  You don’t have to make sure the lock is engaged, and you don’t have to disengage it when you are finished.  It is simply a work of genius and I can’t think of any drawbacks to it at all.