Well, it's been about a year since Def asked me to write up an article about my trip to the Bowron Lakes. Since then I've actually done another trip there, so instead of being redundant, I guess I'll talk about my new trip.

I'll start with a brief description of the Bowron Lake Provincial Park. The park is roughly 139,700 ha. in size nestled in the Cariboo Mountains of centarl British Columbia. Yes, there are Mountain Caribou in the park, although sightings are rare. I think I saw two this year, a first for me. There are about 12 lakes, depending on how you count them, and the trip also takes you over stretches of the Cariboo and Bowron Rivers. Two of the most scenic waterfalls are Log Jam falls (may not be its real name) just a short way below Isaac Lake, and Cariboo falls which can be (safely) reached by a short hike.

In all, the circuit measures in at 116 km (72 mile). Because it's shaped liked a diamond, you end up back at the parking lot where you started. The journey takes you through several distinct ecozones I call northern rain forest, alpine, and boreal lakeland. The latter reminds me of Northern Saskatchewan, except there are some smallish mountains, depending on where you look.

There's also plenty of wildlife such as moose, eagles, otters, beavers, and great blue herons. Unfortunately, a newcomer called the mountain pine beetle has had a detrimental effect on the park in recent years. The upside is that there is plenty of firewood

All my previous trips to the Bowron Lakes were taken in conjunction with my old alma matter, Canadian University College. I am a graduate of the 'Outward Pursuits' Bachelor's program, class of 2002. My canoe class field trip was in 1998, and my kayak class trip in 1999. In 2007, my professor called me up because he needed a canoe partner, and I gladly accepted the offer. At any rate, the canoe and kayak field trips take place in the middle of October in order to take advantage of the Canadian Thanksgiving break. The park is technically closed by then, and there are few other campers to share the lakes with. The weather tends to be cold, hovering just a few degrees above freezing unless the sun is out. When the sun is out, I can usually go about quite comfortably in a t-shirt. More often, it's cloudy and it rains frequently, especially on the north side where the cedars grow, technically a 'rain forest'. It is not uncommon to have it snow at least once on the trip, although the snow line usually stays at a higher altitude than the camp sites. that being said, my professor has been caught out on the lakes when they started to freeze up.

So my trip in the middle of September promised to be a new experience, if only because the park was still open. The lateness of the season still meant that there was relatively few other people on the circuit, although we did share the group sites twice. We started out on a sunny, calm day, but my pessimism earned from three previous trips told me that it wouldn't last. Thankfully, I was wrong. For our entire trip we had sun, heat, and flat water. oh, it was paradise. There weren't even any misqutos! The clouds only rolled in on our last day as we dipped our paddles in the Bowron river, just above the last lake. We had already pulled our boats out of the water when the waves started to build.

for those that enjoy living off the land, we often met up and conversed with a group of doctors from Vancouver that almost always had a hook in the water. They did quite well, catching several different species, the exact particulars of which have escaped me. we also ran into a family of otters that were enjoying the abundance of fish.

On my first two trips to the Bowron Lakes I carried two knives: my Rucksack and a mora with a 3.75" blade. For my trip in 2007, I again took my Rucksack but this time it was accompanied by an Evo S10, Stayglow Huntsman, and Midnight Manager. It was a field test to see what I preferred. I found that the wet, cold weather, combined with the gritty mountain silt that worked its way into everything, made operating the Rucksack difficult and almost painful for my cold, damp hands.

Caribou Falls is always a popular side trip. In 2007 I started a tradition where I try to get everyone's knife in a group shot with the falls in the background.

For my trip last year I took only two knives: My newly aquired +B SG PE OHT, and my Explorer plus.

(2008 group knife shot)
An added bonus to the September trip was that the low bush blueberries were ripe and plentiful!

If any of you decide to do the Bowron Lakes circuit, try to plan in a visit to historic Barkerville as well. Enjoy! 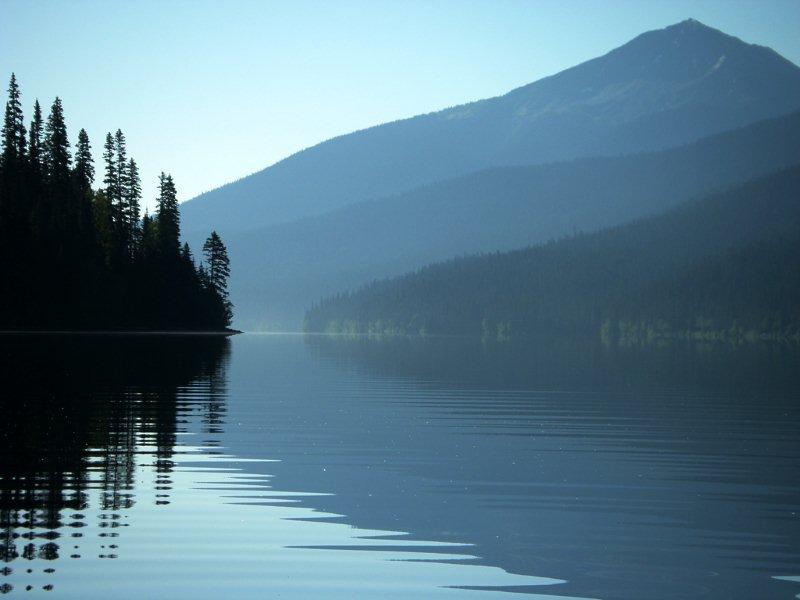