The redesigned Ranger series of knives from Wenger have really grabbed my attention. Dubbed the New Rangers, there are a total of eighteen different variations shown on the Wenger site HERE and on the preceeding page. Being the multitool nut that I am, I was most interested in the ones with the folding pliers and the folding scissors.

Felinevet reports that none of the folding plier versions are available yet, so in order to slake my thirst I bought a scissors version, the model 172 Gardener.

It arrived last week. I've been carrying it almost every day, playing with it, getting used to it. The one thing that first catches your attention is how large it is, compared to the more commonly carried 91mm Vics and 85mm Wengers. For those of us that are metrically challenged, this translates into a knife that is over 5 inches long, when closed.

The most obvious thing that makes the NewRangers "new" is Wenger's use of contoured EVO grips. A radical change from the traditional flat-sided cellidor scales one normally associates with knives made in Switzerland, the EVO grips add considerably to the control and comfort when using any of the three main features on the front side. Whether knifing, sawing, or scissoring, the palm of my hand falls naturally into the dished-out area of the handles, while my thumb and forefinger find plenty of traction on the molded checkering.

Not only do the EVO grips feel better, I'm quite certain that they are safer to use as well.

From the website photograph, it appears that the Wenger scissors are just another example of the folding design we are seeing on all those junk Chinese tools that are appearing everywhere. Let me tell you otherwise: these are hands down the best folding scissors ever made! Man-o-man are they ever sweet! (I'm wondering if the whole dang design can be scaled down and put on other knives and multitools?)

As seen in the pictures above, the top scissor blade is stationary, and rides along with the knife handle. The bottom scissor blade does all the moving, and is returned to position after each cut by a clever backspring linkage. (Unlike smaller, previous Wenger scissors, the top scissor blade does not bounce along with the backspring on each cut.) Being a quite large device, the 172 scissors hack thru clamshell packages, cardstock, and small shrub branches with ease.

Afterwards, I did some fine test cuts on light tissue paper. There were no problems with skipping or missed cuts.

Shown above is the NewRanger 172 (bottom) compared to the previous model Ranger Mountaineer. Note the change in handle scales talked about earlier.

The long saw blade remains the same. I have not yet used the one on my 172, but it is no different than the older model, which was great. As Def says, once you get a Ranger with a saw blade, you no longer have a need for a regular saw!

Last thing to mention is the knife blade. It is a biggie. My model 172 has a combination edge, with about 1/3 near the tip plain and the remaining 2/3 serrated. I guess Wenger is calling this model the Gardener, so they would expect you to need the serrations to hack through small bushes and branches and stuff. Looking through the other NewRanger models on the Wenger site, I see some with combo blades like mine, while others have plain edges. A few have one-hand opening blades. The model 57 Hunter has a blunt tip skinning blade. It all depends on the expected application.

I like how Wenger is tailoring each knife to its intended end user. 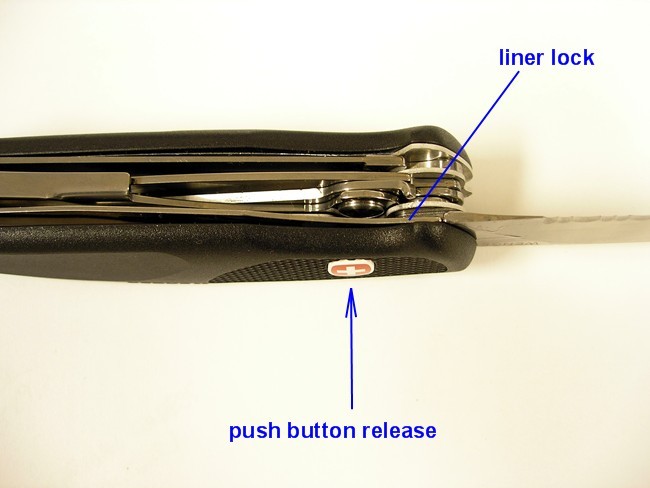 I also like the push button release on the liner lock. Well, I guess I like it better than the old sliding switch release on the previous Ranger series. Open up the knife blade and the liner lock snaps smartly in place. Push on the Wenger logo button on the side with your thumb, and the liner lock releases, allowing you to fold the knife back up. It works slick for right-handed people. It also works well for us leftys, as the button can be pushed just as easily with the forefinger on the left hand. Yay Wenger!

I like my 172 a lot, so much so that now I'm looking forward to trying out one of the folding plier models even more. So much for slaking my thirst.