Or was it someone else's?  Recently I was sent an interesting story from a member, who wishes to remain nameless for obvious reasons.

We all carry a SAK to be prepared for the types of situations that arise on a day to day basis in the type of environment we normally frequent- for example, folks that spend time in the woods often carry models with wood saws.  But, what if the tools you use on a regular basis are specialized, and anything that isn’t the “right tool” is scrutinized?  Would you still carry your SAK?  For one person, it’s very lucky this particular member did!

As a neurosurgeon, this member was called in to remove a titanium plate in the patient’s cervical  spine (at the base of the skull)  which had somehow shifted from the position it was supposed to be in, and had to be removed to prevent complications.  At this point, allow me to point out that while I am re-writing this, I am not a doctor, and some of the details or terminology might not be correct.  Please bear in mind that I am attempting to tell the story as closely as I can.

The patient was prepped for the surgery, and all went well with the anaesthetic, incision and so on, and everything seemed fine until the special screwdriver used on the specialized screws broke on the first screw, and wouldn’t fit in the other three!  No problem, right?  Hospitals have lots of backup equipment right?  Apparently not in this case, and after a search of the facility, and cracking open two other surgical spine kits, a replacement had to be ordered for immediate delivery from the manufacturer.  Bear in mind, the poor patient was lying there, neck cut open, with three screws in place holding the plate, unable to be closed up until the procedure was completed, but also unable to be left lying there wide open for any great length of time!

After about three hours of waiting, there is still no sign of the specialty screwdriver that was ordered, and our inventive member decided it was time for action.  Fortunately he always keeps a Victorinox Explorer in his pocket, attached to his key ring, so he instructed one of the nurses to reach into his pocket (he needs to keep his hands clean for the surgery) and pull out his SAK, remove it from the keys and sterilize it.  Twenty minutes later, the SAK is prepped for surgery, and the small screwdriver tip at the end of the can opener fits the specialty screws perfectly, allowing the operation to be successfully completed!

The operation was completed without further incident, although the anesthesiologist was curious as to why our amazing member would carry a SAK into surgery- I can imagine at least one person in the world who would consider it cause for a serious headache if the trusty SAK wasn’t handy!

I would like to thank this member for taking the time to submit the information, story and pictures that made this article possible, and this one will go down as one of my all time favorite articles here on SOSAKOnline.  The demands for your time must be great, and I for one hope that should I ever require a similar procedure, that the surgeon is at least half as intelligent and just as prepared! 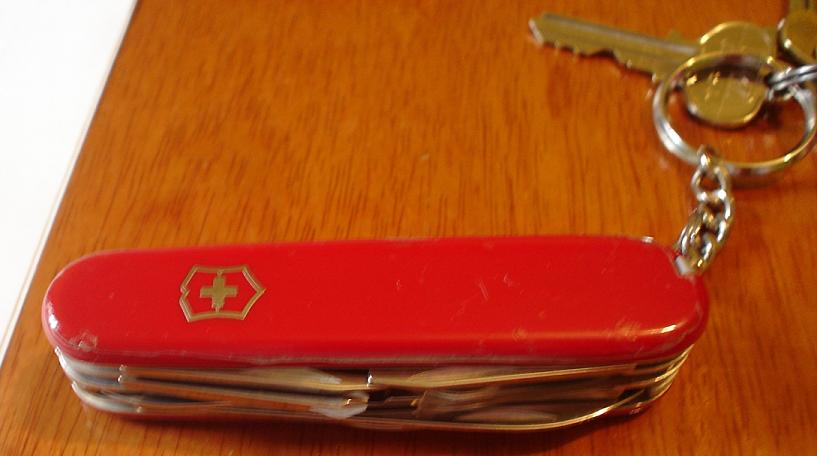