Credit for this article is a bit involved- I’ve never been thrilled with the “electronic” SAKs that Victorinox started cranking out a few years ago, but I decided despite my personal feelings, I should at least look into them in order to deliver a well rounded look at SAKs.  So, a call to Tim at Felinevet resulted in a used 512mb SwissMemory model, which had obviously served someone well for some time.  The idea of the upgrade came from Master Modder Spork, who had gotten the idea from Vic_Man, the polish came from Rotokid... you get the idea!

As it turned out, I was amazingly unimpressed- it was just an oversized Classic with a flash drive in it, and when I popped the drive into my computer, I was even more unamused as the flash drive didn’t even work.  Considering what I paid for this SAK (Tim sent it gratis- thanks Tim!) I really couldn’t complain too much!  So, it kind of just got dumped into the corner with some other things I didn’t pay much attention to…

A little background might be in order for anyone that might not be familiar with my dislike for the “electronic” SAKs.  I am not fond of them simply because of the built in obsolescence inherent in all modern electronics.  Sure, a 1gb SwissBeat or 512mb SwissMemory might be useful now, but in 5 years when no one is using flash drives anymore, and we’ve moved beyond the need for USB ports, it will be just another oversized Classic.  Meanwhile, my 60 year old Soldier is just as functional today as it was the day it was made- ditto for my old Camper!  Of course, 25 years from now, the USB port will be as obsolete as tape drives and 5 ¼” floppies!

For those wondering about the quality of the replacement module, note that both chips are made by Samsung
Then one day on the forum when our resident modding guru Spork60 linked to an article on Instructables.com that Vic_Man had sent to him.  The Instructable showed how to upgrade a SwissMemory using other commercially available flash drives.  Spork used the 2gb Firefly model but then stated that if he’d known how easy it would be, he’d have used the 4gb Lexar Firefly model.  So, I decided that if Spork can do it easily, I should be able to manage it well enough eventually!

Still, I put it off for a while, and soon forgot about it.  Then, a month or so ago I got a package of goodies from Rotokid, which included some scale polish (See the look at scale polish this month) that he had told me was really good.  Fortunately the SwissMemory was the closest used SAK to me when I got the urge to try out this amazing new polish, and I started playing with it.  So, while trying out the polish I started thinking about the drive module again.

I decided to look into how hard it would be to find a 4gb Firefly, and surprisingly it wasn’t hard at all, and one was soon winging it’s way to me to be installed in my SwissMemory.  As Spork said, the upgrade was amazingly easy, despite my extreme paranoia about working with any electronic device!  In fact, I did most of the work with either the blade on the SwissMemory and a Leatherman Charge- it’s almost impossible to beat the Leatherman diamond file!

Given my paranoia about working with electronics, I was pleased to see that the unit still functioned when I was done with it!
Once the SAK was cleaned up, the scales polished and the drive replaced, this little SAK has seen quite a few miles in my laptop bag.  Of course I needed to make the drive as multifunction as the rest of the knife, so it was off to PortableApps.com to outfit it with all the security and utility software it needed to be as useful in my laptop as it is on my belt. 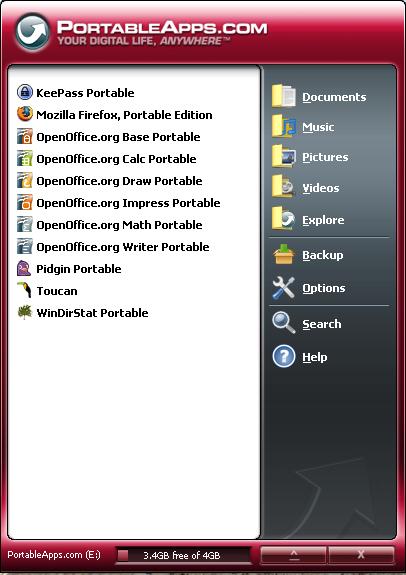 PortableApps- digital SAK!
All in all, I am glad that I finally got around to getting one, and while I still feel the same way about “electronic” SAKs that I used to, I can take heart that at least one SAK will be kept from the scrap heap any time soon!