The morning started like any other, we checked out our commissions (rigs) and left the station even before the sun was up.

Little did I know that this would be a day I would never forget.


While heading north I spotted a 10-46 (motorist needing assistance) in the southbound lane.

Flipping at the nearest exit, I pulled in behind them with the emergency lights on.

Simple tire change within ten minutes we were done and on our way.

Coming upon an abandoned vehicle, I pulled in again with my emergency lights on and checked out the truck for missing stereo, busted locks, vandalism, and signs of theft even the occasional person sleeping.

After tagging it I returned to my rig and was getting ready to call in the information when the day took a sudden drastic change.

“My wife has stopped breathing.” The man announced as he knocked on my window “She is in the truck behind you.”

Calling on the radio for a medical emergency, I went back to his pickup truck where he was checking his wife pulse (very shallow).

While monitoring her pulse he could feel her breath on his hand, while we WAITED for the ambulance.

Ever now and then he would shake her and tell her to stay with him she wouldn't respond but her eyes would flutter.

I don't know how many of you have experienced this (I have been CPR trained for over two decades and this was my first). It was surreal.

It was like everything was going 100 miles an hour but I was walking through molasses.

Getting the defibrillator out, I placed it in the bed of his truck (just in case) he asked me to double-check her pulse I couldn't find one, not even a shallow one.

”We need to get her out of the truck.” with that we moved her to the pavement.

While her husband started breathing for her I started removing the clothing that is when I realized my Rescue Tool was still in the rig.

Reaching down I pulled free my Ranger 61 (w/clip) and cut her clothing away and placed the pads on her.

”Do not touch person.” The defibrillator advise us as it checked for vitals. "Do not shock, begin C.P.R”.

That was good news, for it detected a faint pulse.

Her husband gave breaths while I did compressions, all the time I watched for the ambulance.

FINALLY they arrived and took over for us.

I remember though as they were getting her ready for transport I noticed the monitor and there was a rhythm.

By this time we had all lanes of traffic stopped. After the fire engine and ambulance left a police officer held the lane for me so I could pull my rig out.

"No thanks, I just want to stay awhile.” As fast as it started, it was over.

The reason I stayed was simple. I felt like crying, throwing up and melting down, all at the same time.

Before her husband left he told me about a mile back she stopped breathing and he didn't know what to do. It was a strange highway to them, it was still dark out (early morning), traffic was speeding by, and then he saw my emergency lights ahead.

"I don't know if you believe in God? he started to say before I stopped him with a shaking voice "Oh, yes I do."

One of the many things I found strange was, I remember looking down while doing compressions and there was my knife with the blade closed, I don’t remember closing it.

Grabbing the knife opening it, using it and closing it was all one motion.

There is an old saying “If you fail to prepare then you prepare to fail.”

Inside my rig between the front seats is a Rescue Hammer with belt cutter in the handle.  On my visor is a belt cutter, on the headlight knob hangs a small case with a Rescue Tool, CPR mask and gloves.  With all this proper equipment, what was handy when I needed it? a Wenger Ranger 61, a knife that I couldn’t stand when I first got it. 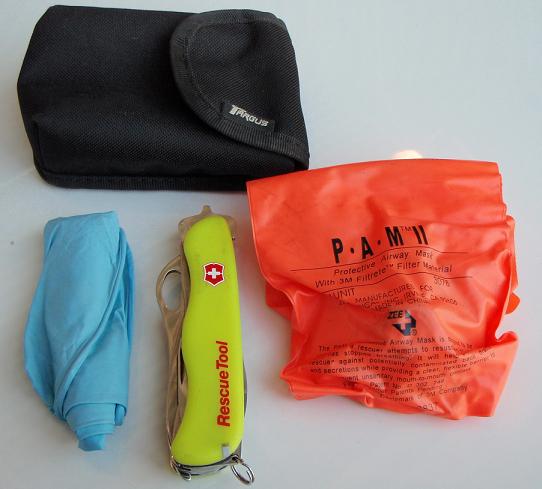 I know now I have found my permanent EDC.