Thanks to some new stuff from Rotokid, I’ve been able to complete a project that I’ve had in the back of my mind for a while.  I’d often thought about layering several strips of spacer material to create a “striped” look to a SAK scale, but the question always was, what to put on top?     Enter the Rotokid, with a new product- this sheets of carbon fiber!  This stuff is a little thicker than paper, but has the same look as his regular CF scale kits on the top side, so it was perfect for an outside layer for this mod.

The scale shape was traced on both the black and red spacer material.
Remember to wear eye protection and respiration equipment when working with man-made materials like Carbon Fiber!  Also, make sure the area is well venerated and that all pets and other people are safe as well.

The process was a simple one- cut out the basic scale shape out of a variety of colors of galvanized spacer material (in this case I used red and black to match the red and black CF I was using) then glue them together using a five minute epoxy- make sure to clamp it good, or else you could end up with some separation between the layers.  Make certain you use a very small amount of epoxy- just a very thin layer, enough to make the spacer wet, or else you’ll have to sand off the dried blobs later on.

One simple trick I often use, but didn’t in this particular case is to use a hole punch to cut the holes in the spacers to accommodate the pins.  If you do this before gluing the layers together you can save yourself a bit of drilling later on.  If you go this route, you can either punch all three layers, or just two, leaving the outside one to re-enforce the CF on the top.  I didn’t do it for this red and black model simply because I couldn’t find my hole punch as I was doing it…

While waiting for the epoxy to dry on the spacers, I cut out a couple of CF strips a little wider and a little longer than the scales and set them aside.  At this point, you pretty well have nothing to do until the spacers are dry.  Once that happens, it’s a good idea to hold it against some old (standard) scales to judge how close you are to the actual size they need to be- this gives you an idea of how much of a margin for error you have in the next few stages.

I like to take it easy with sandpaper (by hand) from this point on.  It might take a little longer, but it also means that you are less likely to have to start over again!  Once you have the scale to the shape you want/need, apply another thin layer of epoxy to one side of the liner (make certain you have the right side of the corkscrew/phillips scale!) and clamp them each to the CF strips you cut earlier, and start waiting again.

Once the glue is dried, it’s time to start sanding again.  I use a Dremel tool to cut away most of the excess, then finish up the final shaping by hand.  If you didn’t cut the holes in the scales earlier, now is the time.  Use whatever tool you find works best, but be careful not to drill too deep, or again, you’ll be starting all over again.  The nice thing about using the colors I did is that it makes it easier to guage how deep I’ve cut, as the color changes, the deeper I go.  The first red is good, the black layer means I am “there” and the second red layer means STOP!  Using a flat circle cutting head (not really sure what it’s called!) I can cut a hole safely without worrying about the point piercing the CF from the backside and ruining my job.  If you don’t have a Dremel doodad like this one, I’d suggest getting one- it’s really, really handy.

By now the scales have pretty well taken the shape we need, and after a final shaping for aesthetic and comfort purposes (bevelling the edges slightly can be done by hand) the scales can be attached to the knife you want with more epoxy, but I prefer a silicone based glue called GOOP as it’s easier to clean up the spillover, and allows you to remove the scales later on if you like.  Once you are happy with it, a final polish will give it a professional looking luster.

All in all, in as little as an hour to an hour and a half, you can easily have a knife like this that you can call your own, and amaze people with.  The new scales are almost invulnerable to harm and will be the envy of everyone who sees it, especially after you tell them you did it!  Of course there’s no reason to point out how easy it really was! 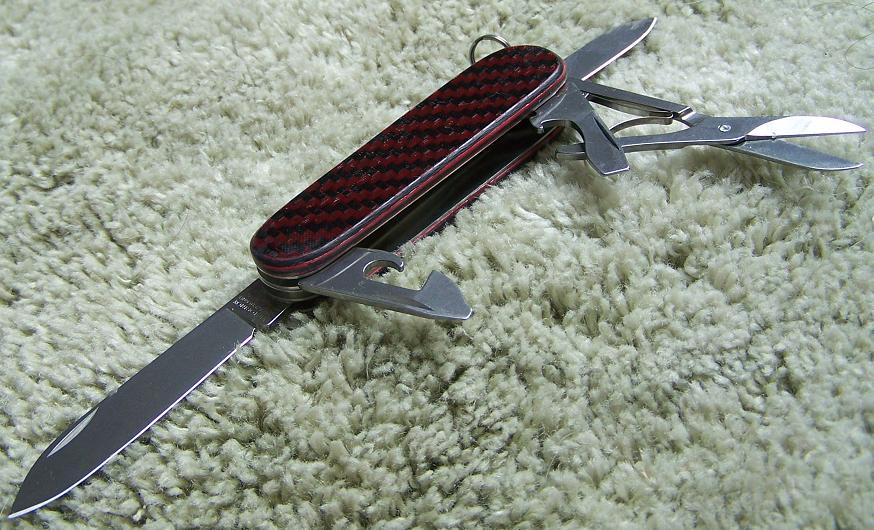 The final product is a pretty SAK that you can take pride in!